The night passed - I managed to sleep despite the lady next to me sticking her elbow in my side and no nudging would move her!

I woke at fajr time....along with the rest of the camp and this made for chaos as we all headed to the loos for wudhu and that first pee of the day. Oh yes....pushing and shoving and general yelling ensued - we all needed a pee! Sabr is definitely needed. We managed to work around this for the rest of hajj and wake 45 minutes before fajr so the queues were minimal.

We were given a breakfast pack which had instant noodles in - how odd - you might think but, you come to realise these instant noodles are a Godsend when you find the hot water urns in the camp kitchens - and therefore you have hygienic food ready when YOU want to eat - excellent! We were told to be ready to go at any time for the government bus to Arafat. Today was a big day....Arafat is essentially hajj. See the hadiths below regarding the serious barakah of attending hajj and being at Arafat.

The Prophet (peace and blessings of Allah be upon him) said, ‘There is no day on which Allah frees people from the Fire more so than on the day of Arafah. He comes close to those (people standing on ’Arafah), and then He revels before His Angels saying, ‘What are these people seeking.” (Tirmidhee)


As for you staying till the evening in Arafah, then Allah descends to the sky of the Duniya and He boasts about you to the Angels, and says: ‘My slaves have come to Me, looking rough, from every deep valley hoping for My mercy, so if your sins were equivalent to the amount of sand or the drops of rain or like the foam on the sea I will forgive them. So go forth My slaves! Having forgiveness and for what or who you have interceded for.’
(Reported by at-Tabarani in his book “al-Kabeer” and by al-Bazaar. Shaykh Al-Albani graded it Hassan. Taken from ‘Saheeh al-Targheeb wa Tarheeb’. Volume 2, Page 9-10, hadeeth no. 1112) 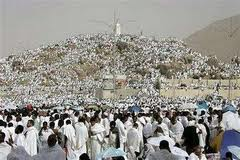 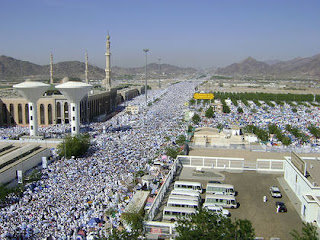 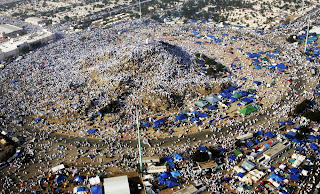 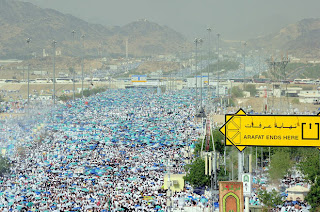 The standing and praying at Arafat is seriously important. The standing in such a huge crowd is to signify the day of resurrection and how we will all stand equally before Allah for judgement.

We had to pack a bag for Arafat and Muzdalifah - I packed light finding the sleeping bag to be the biggest thing I took alongside valuables - which you do NOT leave in Mina.

We made sure we were ready for the coach. The previous day's experience taught me that it was a free for all and first on first seated. I managed to get a seat this time - some guys had to stand and we were off. Singing 'labbayk'.

Arriving at Arafat I was surprised by the layout. All the documentaries focused on the 'Mount' and never showed how it really is. The reality is that Arafat is a large area and is divided into sections. The sections corresponded to our camp numbers.... so we were deposited at section 32. I was gobsmacked by the entrance - it was like a classical country garden - complete with twee water fountain and gazebo.  I later found out this garden - although public for camp 32 was created for a special 'bit' of camp 32.

Our group was segregated as usual and we were led to our allocated shady spot. It was a screened off area and the shade was created by draped material - see following pics. 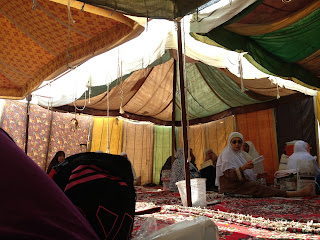 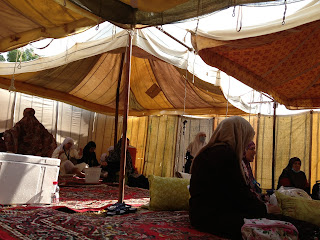 There was no air con; but there were parts of Arafat with tents equipped with air con and sofas. I found this to be a bit sad. Hajj is about being equal - wearing ihram and standing together rich and poor to worship our creator. However there was so much inequality.....money really does talk. It buys aircon and comfort worship.

Our tents had the same barrels of ice with soft drinks that we had back in Mina so I got quite creative with the ice cubes and pouring cold water over my scarf to cool off throughout the day.

Once we settled in I promptly fell asleep for a while. The early start and still being feverish took it out of me. I amused several of the ladies as I was apparently snoring my head off. My sleeping was to become a source of amusement, amazement and in some cases derision over the next few days.  When I woke up I went for a small walk to find the loo. The loos were more basic than Mina - no shower or hose pipe - just a small tap for water.

I chose to spend my day situated in the shaded area. I spent the day making dhikr, duaa and completing my prayers. One of my friends made it to the actual mount and so did Mr. He said it was an amazing experience. It sounds really peaceful and spiritual - and there were parts of it that was. I loved it when one lady led the group in duaa and we were all crying. However with the sheer volume of people and the tannoys and the helicopters and so forth it was very noisy!

The food was again chicken.....but it was southern fried and came with chips - a huge portion and being paranoid of any bad tummy I ate all the chips and picked at the chicken a bit.

As the day wore on Mr came to find me and see how I was doing health wise. Not brilliantly - however he had found out from a group member there was a free clinic in the camp and they were giving out meds to people who were poorly so he took me along. This is where I think that people don't give the Saudi's enough credit. The clinic was clean, modern (first world standard) and I was seen immediately. Within ten minutes of walking in to the clinic I had antibiotics and tablets for my fever - free of charge!

That was not to be my last visit of the day to the clinic. Once maghrib had passed we started the inevitable wait for the coach for Muzdalifah. I decided to panic and run to the loo in case I missed the coach (I never learnt - it was always hours of waiting) and fell flat on my face - as I fell I felt my foot turn out. I have notoriously weak ankles/feet and knew what had happened as I was still falling. As soon as I was helped up by several brothers - cringe - the pain kicked in. I knew it was a sprain and this did not bode well. Umm Yacine and her mr took me to the clinic and I was advised to have an x-ray if there was no improvement the next day  - that was just out of the question - the next day was going to be full on! I put ice on my foot and strapped it up as tight as I could.

We finally got called to the coach and had a good giggle at the older ladies in our group. They were worse than us in their determination to be on the coach first. We were in a holding pen for the coach and slowly but surely they managed to edge themselves closer and closer to the exit. They were deadly serious - though I didn't blame them.

Side note on beggars at Arafat

There are people who choose to target Hajj pilgrims for sadaqah (charity) as it's such a special day with so many blessings. My advice is to be very aware and not be pulled in. The beggars I encountered were professional - one lady had a top of the range mobile phone which rang as she was doing her 'speech' and she stopped to answer it!  We had a brother from the UK approach us in our tent in ihram claiming to be in dire need of money - bear in mind to get to hajj that year he must have paid a minimum of £2,500 and he had his son with him! My personal tactic was to offer food - I had left the main portion of my money at the hotel as its really not needed on the main hajj days.