I admit to not writing in my diary in Mina. Why? well for starters space was at a serious premium and these were the serious days of Hajj....so time was spent doing our hajj rites and being sick - as you will see.

We were advised that we would be leaving for Mina after fajr. So after fajr we packed our bags for Mina. Umming and ahhh'ing over what to take. Take too little and be annoyed, take too much and well you will find out what happens! I managed to pack quite lightly (for me) and went with a backpack and a small drawstring bag. The backpack was mostly taken up by the sleeping bag I was to use in Muzdalifah.

Umm Yacine did better, one backpack!

I felt like crap. Oh yes, the sore throat that hassled me all night along with the tooting all night was still there.

We had our morning cup of tea and went to the lobby to see about the coach. Not there. A theme for my hajj was 'rubbish transport'. Indeed our coach was not there. We had been warned the night before were we to miss the coach we would have to walk to Mina as its a coach arranged by our local Mutawiff.

So back to the room we went - I suspected the coach was going to be hours late.

An hour later we trudged back down. The lobby was full of the older ladies in our party with all their luggage around them looking very stoic. No sign of the coach.

We chilled in our room and I decided to nap. Fajr was at roughly 5am and not much sleep was sinking in. I passed out to hear the door being banged. Mr was saying the coach was here. So up we got and trudged down to the lobby. Lots of people and no coach. Not happy, I turned tail and went back to my room. I was sleeping end of.

Well later on about 12pm we were summoned again, but this time the coach was here.

But we had paid for staying in our room - unlike the stoic ladies of the lobby. There were no seats left. Seriously we had been provided with one coach and it wasn't enough for our group.  We struggled onto the coach which was boiling (no air con) and the first thing I noticed were loads of men sat down. Us later ladies were stood and not one got up to offer their seat. I was furious.  It had been pointed out in the meeting the night before that travel arrangements were for the infirm/elderly and ladies first. This was certainly not the case. I wasn't well - it was 36-38 degrees and there was no air con.

I immediately started to complain loudly - lol. Umm Yacine was a little embarrassed until she realised the men were not moving and then started to be angry - in a very quiet stoic way. My husband then squeezed onto the coach by the second door and I loudly told him 'look at this' and gestured round the coach. My husband did not look impressed  - he agreed with me - it wasn't on. Thankfully two guys got up letting me and Umm yacine sit. I immediately passed out.

The coach journey took three hours. I kid you not.

Mina is a 15 minute drive from our hotel and yes we did arrive in Mina after 15-20 minutes. But we then got horrifically lost. I felt like hell and kept passing out - I thank God those men gave their seats to us. It was so hot and I fel sicker and sicker.  Despite how awful I felt seeing Mina was a sight like no other. I was amazed and shocked at the same time. People - so so so many people from all over the world. And the tents. Miles and miles of tents. 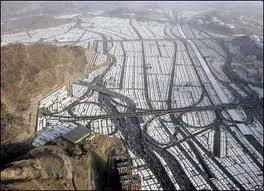 We drove round, and round, and round. Between bouts of sleep/unconsciousness and feeling like I was being slowly roasted - I was fascinated by what I saw. I was also nervous. From my research into hajj I knew Mina would test me.....in fact Mina was what I personally dreaded.

We finally arrived - at camp 32, our home for the next five days.

We were led to our tent along an astro-turfed 'corridor'. I couldn't believe how packed and how many tents were in our camp. Our tent was ok - it had sofa beds that were able to be made into chairs or beds. We were given a pillow and a blanket each.  I didn't take any pictures in Mina, simply because I was either making hajj rites or in the tent where women were not in hijab etc. 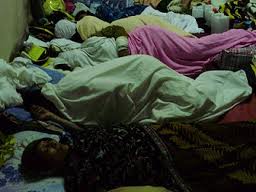 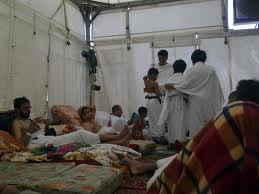 Pics from web but this is pretty much how our tent was.
We were lucky. I later heard that people who had gone on earlier hajjs did not get sofa beds, or carpeted floors.
We had air conditioning which was good - nearly 40 degrees and stuck in a tent with 30 women you need it!  I found a spot in the corner which was perfect for me. I get claustraphobic - hence why I dreaded Mina so much. Not that I was bothered. I was soaked with sweat and feeling even worse. I went to sleep - I couldn't even be bothered to unpack (theres no storage anyways).
That day was awful. I descended into fever. I was going hot and cold and having delusions. At one point I was believing I was sat with my dad having a cup of tea in his house. My poor father is dead and I was on hajj. The other ladies noticed I was unwell and one thing I have to hand to Algerian women they are walking pharmacies! One lady had some tablets which helped me feel better. I was able to get up and change into my housedress as my clothes were soaked. I got to check the toilet facilities out (this is another blog post - I promise!) and sit up and have a few cold drinks.
We were lucky to have a plastic barrel with water and ice in, filled with cold drinks. I later learned other camps didn't have this facility. We were given two meals a day. I didn't eat my first meal, I was too poorly - and the women just left it at the end of my bed but I threw it out as any food kept in that heat would not be good to eat hours later.
This first day in Mina was spent settling in and fulfilling our prayers. ﻿
Posted by Hajja at 19:47