The journey to Makkah continued......

So I left off with us boarding the flight in Cairo.

Here follows my diary written as we touched down in Jeddah

We hit an air pocket and basically experienced the worst turbulence ever. At one point I was actually screaming out loud. Food and drink went everywhere. At Jeddah you can identify who was on our flight by the food stains.

We hit the air pocket not long after coffee was served. Poor Mr watched me gulp my tea down as if it was going out of fashion as he longed for a coffee. I never usually rush my tea but I think with it being cramped (this was NOT business class!) I felt it best to drink it up. Finally the coffee was offered and Mr sat back to enjoy then BAM!

It started as regular turbulence. I thought - ooh this is fun! Then suddenly the plane started shaking and we suddenly plummetted. It was such a drop that food, drink and God knows what else went flying. I started screaming, loads of people were shouting and then started saying their shahadah - and I did too....I thought if I am going to die then I am damn well declaring my faith!

After the plane settled down and we knew we weren't going to die the plane started chanting 'labbayk'. The passengers started to help the staff clean up - they looked embarrassed that we were helping them - bless. Some people had been injured. The lady in front of me had not been wearing her seat belt and hurt her hand being thrown from her seat. A man across the plane was drenched in hot tea and bleeding. He had to get an injection and the poor man giving him it was shaking so badly.

*As I write this two Indian guys sat opposite me in Jeddah Terminal are gawking at me. Wondering is writing so uncool?*

So that was my diary excerpt. I didn't mention that I was crying and shaking for half an hour afterwards.  I have never wanted to get off a plane so badly. I took a picture of the mess on the plane. I have to say when we disembarking I noticed the front of the plane was worse for the mess. 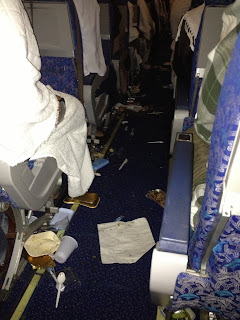