The first night we left the hotel about 1am to do our umrah (minor pilgrimage). We got a taxi as a group and arrived at the Masjid Haram in about 10 minutes. I was so excited, but firstly I had to make wudhu. The toilets were just outside the masjid based underground - a bit like London but on a larger scale. Coming back out of the toilets I was horrified to see the gates shut and my husband peering down at me from the other side.

Our guide made it clear we had to stick together. So I clung to Mr's back pack then i remembered my phone and decided to take a few pictures - much to the dismay of one of the men in our group. He advised me not to do this as I would lose 'khushu' and that I could take pictures another time. Mr was cross that I had stopped clinging to him so I put my phone away and off we went.

We went in to the Masjid and upon seeing the Kaba me and the other girl in the group started crying. It was weird seeing it for real - because for me the kaba was like this mythical thing you see on TV and in pictures. I would liken it to meeting a A-list celebrity (sorry for the poor analogy) you know you see their pictures and you know they exist but seeing them its like - wow! But this is better than a celebrity of course!!!!

We had officially started Umrah.

First we had to do our tawaaf - seven circles of the Kaba. If you have ever seen the Kaba on TV or in a picture then you know how many people crowd it - hundreds and thousands. Because it was 2.30am there were less people but still in their thousands. 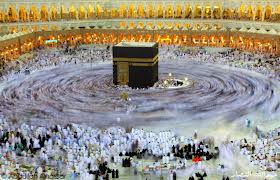 The Kaba (web pic)
In we went.
I hate crowds. Honestly. It was something that worried me about hajj from day 1 were the crowds. As we we started out tawaaf a calm descended on me. Holding onto Mr for dear life we circled making duaa.
It was fascinating. People of all different races surrounded us all there for the same purpose. It was hot, intense and yes a test of patience. People were pushing and shoving. One lady nearly fell over completely and I reached out to help her but she looked shocked, I guessed it was a cultural difference or maybe she thought I had tripped her - LOL.
Mr called out 'sabr! sabr!' (patience) whenever the shoving got too much. One man was really giving me a shove so I tensed my back up and dug my heels in - I am no supermodel.....he couldn't move me after that! It also discouraged him from shoving me without me having to interact.
Going around the Kaba was emotional. Making my duuas (prayers) for forgiveness, and for those who had requested me to make on their behalf brought me to tears. At one point I heard birds singing - they were flying over us. I said to Mr 'Can you hear the birds?' and he said 'yes they are doing tasbeeh' (worship). It was definitely not the dawn chorus.
Once we finished our seven circuits we made two units of prayer. After that we headed to the zam zam fountain.
The Well of Zamzam (or the Zamzam Well, or just Zamzam; Arabic: زمزم‎) is a well located within the Masjid al-Haram in Mecca, Saudi Arabia, 20 m (66 ft) east of the Kaaba,[1] the holiest place in Islam. According to Islamic belief, it is a miraculously-generated source of water from God, which began thousands of years ago when Abraham's (Ibrāhīm) infant son Ishmael (ʼIsmāʻīl) was thirsty and kept crying for water. Millions of pilgrims visit the well each year while performing the Hajj or Umrah pilgrimages, in order to drink its water.
Muslims believe that the Zamzam well is a contemporary miracle, never having gone dry despite the millions of litres of water attributed to the well consumed every year. It had been deepened several times in history during periods of severe droughts﻿

Here we drank the water as is customary and poured it on our feet. Zam zam water is considered by Muslims to be blessed and like food - it nourishes those that drink it. I can say honestly when I was on hajj - I drank a lot of it on Eid day and you will see I did not eat for a very long time.

The Prophet SAWS (peace and blessings of Allaah be upon him) said: “Verily, it is blessed, it is food that nourishes.” (Narrated by Imaam Muslim, 2473).

Once we had our fill we went on to complete the second part of our Umrah which is Sa'ee. Sa'ee involves completing seven runs between 2 mountains, Safaa and Marwa.

Sa'ee (Arabic: سعى‎ saʿy "ritual walking") is the back and forth movement between the hills of Safa and Marwah in Mecca. It is an integral part of the Islamic Hajj and Umrah, symbolizing the search for water by Hajar in order to give to her son Ismail

This took a while and my feet hurt a bit. But Alhamdulilah it was ok - the men had to run for part of this - and there was a green light to show the men where they need to run.  Again we made lots of duaa. 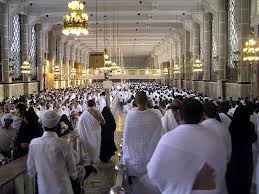 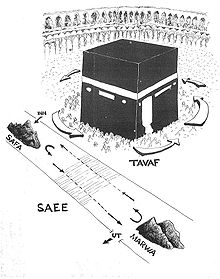 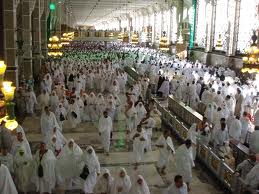 Pics all from the web
Once we completed our sa'ee that was it! Umrah was done. It was coming up for fajr time so we sat down and waited for the prayer to come in. It was amazing to hear the call for prayer - and sadly this blog doesn't like me uploading videos - so I can't share the recording I made of it.
We had to walk a fair bit to catch our taxi back to the hotel and a fair few of us were hobbling along - especially me and the other girl.....until we spotted shops! That perked us up! But alas - we were spirited away to the hotel. I woke my roomie up so she could cut a piece of my hair off to signal the completion of Umrah and then I passed out!