The Night Before Mina

So I woke up full of energy despite having been up till way past fajr.

One issue were my feet. They were elephantine. They reminded me of my father's feet before he passed away - swollen badly. I was worried. They also ached. In fact all the time I slept I felt my feet ache from my Umrah - LOL. Too much sitting down (days in fact), flying and then walking caused it.

My husband had the same issue but also knew the cure - exercise.  All I had to do was flex my feet and toes and apparently it would ease off. I hoped so - It was uncomfortable.

Mr decided to go on a trip to see the Cave of Hira. He did offer for me to go - but I was shattered and these feet were not up to a major walk.  Its a popular place for pilgrims to visit, should they arrive in Makkah at a reasonable time before we set off to Mina.

Information on the Cave of Hira

The Cave of Hira is situated two miles away from the holy city of Mecca in Jabl al Nur. It is a small cave with about 3.5 meters long and 2 meters wide. The cave was Allah’s apostle (peace and blessings of Allah be upon him) most adorable place for mediation. It was in this cave that the archangel Gabriel revealed the prophet's the first divine revelation.

Prophet Muhammad (peace and blessings of Allah be upon him) was in this cave when Gabriel appeared for the first time to order him to read. However, his reply at that time was “ I cannot read” .

These were the Qur’anic verses that Muhammed (peace and blessings of Allah be upon him) received in the Cave of Hira.

The Cave of Hira has got a significant history and it faces the Ka’abah. It is accessible just for Muslims.

Visiting the Cave of Hira has nothing to do with any form of worship. The cave is located on the way to Mina ; about 3.5 kilometers away from Mecca on the Nur Mount. 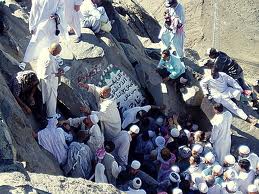 Cave of Hira (web pic)
So I took it easy - sat reading, went to the local shop for an icecream and nearly boiled to death in the 5 minutes me and Umm Yacine took to get there and back. It was worth it for a chocolate ice cream. We had lunch which was exactly the same as dinner the night before....the BBQ chicken Umm Yacine had been excited about. This was to become a recurring theme. It was also what we had for lunch the previous day. Hmmmm chicken and rice three meals running.
Generally it was a lazy day. Reading, chatting and staying in the air conditioned room. I was desperate to go to Makkah and see the Kaba again but Mr did not seem to appear. I was getting peed off but then finally he turned up bearing gifts. A huge bottle of strawberry Fanta, a new hijab and a ring (nothing flash....it later turned green!).
He went off to shower and we then went to Makkah.
We made it into Makkah as the adhan went off for maghrib. Everyone outside the Masjid Haram were in perfect lines for prayer. Only we didn't have wudhu. We couldn't pray. We tried to squeeze through to get to the wudhu stations but as prayer was secomds away people started nudging us away or not letting us pass through. I started panicking.....Imagine thousands of people all lined up to pray and you running round like a headless chicken....not fun. 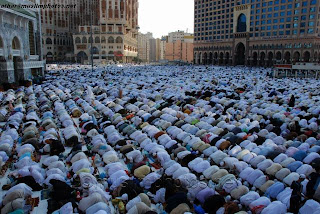 people praying outside masjid Haram (web pic)
We started running around - desperately but the prayers started.....I was in meltdown mode!
The we spotted a door.....oooh a door we both thought and ran towards it. However at the door was a guard complete with gun. He yapped in Arabic at us.....basically no entry. We explained we needed wudhu and he said no. Looking uninterested.Don't ask why I did what I did next. I decided to attempt to run through the door....I randomly thought if I went through the guard would let my husband through!
Wrong.
The guard grabbed my arm and flung me away from the door! Mr looked horrified and started yelling leave her alone. I held my hands up and said no no its my fault...lets go.
So we had to wait by the guard's barrier - yes with him glaring at us before we could go make wudhu....it then took us forever to get to the top floor - and it was rammed with people. Literally there was no space to pray - on the top floor! And it was not even prayer time! Finally we found a space for 2 of us and off we went....to then be stood on and walked in front of. Hmmm. Well Alhamdulilah we finally managed our maghrib. As soon as we finished a man started yelling at us. What now?! Apparently women are meant to leave their husband's side - yes in a mosque that can take millions of people and pray separately. But there was no space - mr told the man this and we decided to go.
We were glad to be out. We hadn't even spotted the Kaba. So we decided to go eat. We didn't fancy chicken and rice a fourth time. So we picked our way across the crowded courtyard to the mall. as we reached the outside of the mall - this took a while as there were so many people and I needed a toilet stop, as did Mr - it was time for Isha prayer. so we prayed outside a row of shops just outside the mall. A nice Turkish lady let me share her prayer mat. We prayed and then it was time to go shopping!
We had a walk around and I was amazed by how many abaya shops there were. There were some beautiful abayas, but Mr kept saying - hold on until Medinah....its cheaper there. I was overwhelmed with choice. There was one I fell for instantly - and to this day I kick myself for not buying it! It was simple; plain black with a multicoloured zip detail with Chanel zip pulls. Its simplicity is what made me like it - it was unique as well - I have never seen an abaya like it.
We were starving by now and knew there would be food somewhere so we went up a few escalators and arrived at a floor with lots of chairs and tables and people eating happily. Great we thought we are here. Five minutes later we had not spotted one food outlet. So we circled the area and stopped several staff who didn't understand what we were after; despite my husband speaking Arabic.  I was so annoyed and snapped 'whats that then? magic food?' pointing at people eating. Finally we realised the food courts were on the next floor below.
We got to eat!
After eating we had a walk around and as we were walking someone grabbed my waist. Horrifed I whipped around to give the perpetrator what for when I saw Umm Yacine laughing her head off.  We were glad to see each other (despite having spent all day together) and we went to find her husband's neighbour from back home who was also making hajj. We then bumped into some men also staying at our hotel and we all were ready to go back.
Well what happened next I can only claim came from the madness of waiting for nonexistent taxis.
Everyone had to head back to their hotel - we were all due in Mina the next day - yep all 6 million of us.
Now remember what I said about our hotel being right at the edge of Aziziyah. The cabs that did stop and these were very few were charging a lot of money. Of course we refused. We will get another cab. Of course we will. Ages later and about half a miles walk through crowds of people all trying to hail cabs we realised this was not going to be as easy as we thought.
Entering into the hajj spirit of patience me and Umm Yacine started singing  - 'we gotta get out of this place' and laughing at the sights that passed us by. 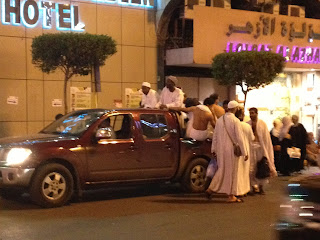 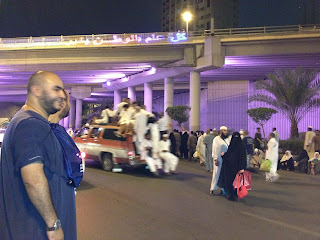 yes these cars were really this overloaded (personal pic)
The amount of people hanging off roof tops of cars, mini vans etc was hilarious. I couldn't resist taking a few pictures. I even have a video which I will put on the Facebook page for this blog as I don't seem to be able to upload videos here.
We eventually got a taxi and accepted the inflated price.....we were too tired to care. Some of the men who had been with us had given up and decided to walk back to the hotel (crazy!) and we actually passed them as we drove back. But we were so fast we couldn't stop the driver. Those poor men had miles to walk.
We got to our hotel and decided to get some sleep in as we suspected that Mina was not going to be restful nor the actual 'Hajj' itself.
I started tossing and turning. My throat felt like I had swallowed a razor blade. Umm Yacine reckoned it was the air con that I couldn't seem to live without so I turned it off in the vain hope of appeasing my sore throat. We opened the window for air and noticed immediately the crazy amount of beeping going on. It was roughly 1am and the traffic going towards Mina was already crazy.
We tried to settle but the beeping was too much. We started joking. Why is it the beeping always seems to be at our hotel? I even suggested one of the guys who worked for the agency I disliked had put a sign up saying 'hoot your horn when you pass' outside the hotel. We were in hysterics over that. I stuck my head out the window and spotted the issue. A coach had broken down just past the hotel....and because the traffic was so dense people didn't realise it was broken down and were beeping at it to move! To befair the Saudis love to toot their horns but this was excessive! 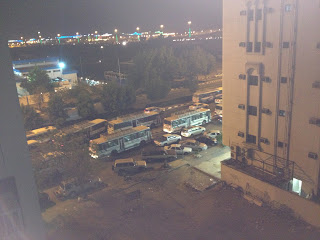 Crazy traffic! (personal pic)
﻿
So between the noise and my throat driving me nuts - i was sucking pastille after pastille to no avail it was a sleepless night. Me and Umm Yacine had some giggles and a good chat - so I have quite fond memories of that night.
Posted by Hajja at 23:23